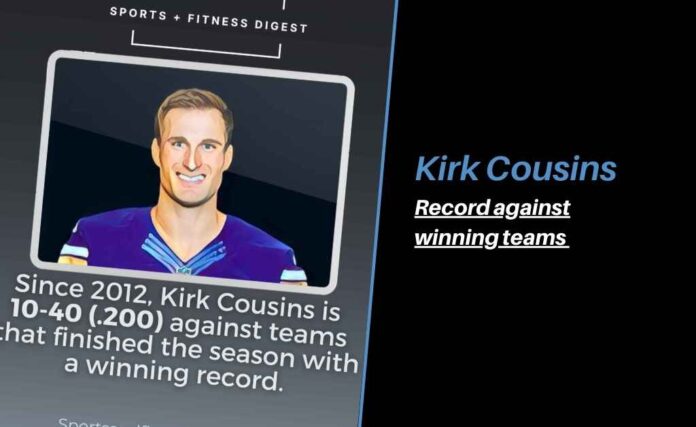 Kirk Cousins is one of the most scrutinized quarterbacks in the NFL. Statistically, he has put together an amazing career. Unfortunately for him, his teams have been average. That has caused his legacy to be looked at in a certain light. Whether fair or not, people expect quarterbacks like Cousins who make top money to win big games.

With a new offensive-minded head coach, Cousins is looking to change that narrative during the 2022 NFL season.

Let’s take a look at how many times teams with Kirk Cousins as their starting quarterback have won games against teams with a winning record.

What is Kirk Cousins’ record against winning teams?

With the Minnesota Vikings from 2018-21, Kirk Cousins was 6-21 (.222) against winning teams as the starting quarterback.

With the Washington Football Team from 2012-17, Kirk Cousins was 4-19 (.173) against winning teams as the starting quarterback.

Kirk Cousins is a unique case because he has performed very well in many of the losses. When you really dig into it, he hasn’t played with the best overall teams during his time at Washington and Minnesota. Football is a team game and Cousins hasn’t always had the best team around him. That is heavily impacting his record. Some make the argument that he just isn’t a winner and I would urge them to look at it more critically.

Cousins is still young. If Minnesota ends up making the right hires at GM and head coach, he could end his career on a good note in regards to winning.