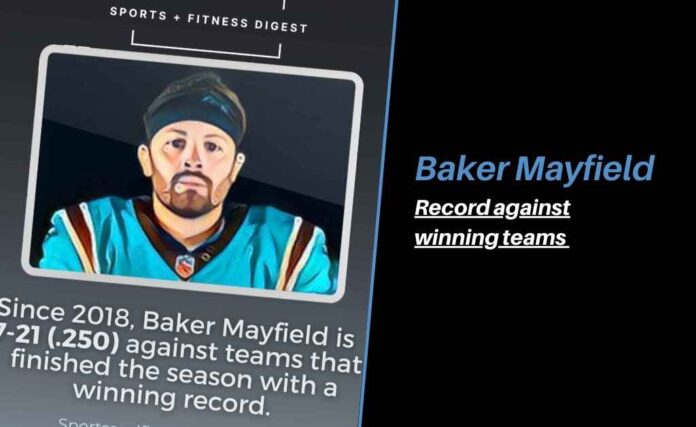 Baker Mayfield is one of the quarterbacks for the Carolina Panthers. This comes after an off-season trade sending Mayfield to Carolina for a conditional 2024 5th-round pick.

While on the Browns, Baker Mayfield broke the NFL rookie passing touchdown record during his rookie season in 2018. It should be noted that the record was broken the following year by Justin Herbert.

Mayfield experienced a bit of a second-year slump during his second campaign. His 3rd year was back on track after the Browns brought in Kevin Stefanski as Head Coach. Stefanski did an excellent job elevating Mayfield’s game. His most recent season was filled with injuries and below-average play. That is ultimately what lead to his trade.

Let’s take a look at how much of that success has translated into wins against teams with a winning record.

The reason for QB wins

What is Baker Mayfield’s record against winning teams?

Since entering the NFL in 2018, Baker Mayfield is 7-21 (.250) against teams that finished the season with a winning record.